I have recently taken up needlepoint again and began reflecting on how it looks on the back side versus the front. As I pondered, it brought back to memory the poem The Master Weaver of unknown (and as I was researching today, of conflicting origin) that was made famous by Corrie Ten Boom author of The Hiding Place and other books.

My life is but a weaving

Between my God and me.

I cannot choose the colors

And I in foolish pride

Forget He sees the upper

And I the underside.

Not ’til the loom is silent

And the shuttles cease to fly

Will God unroll the canvas

And reveal the reason why.

The dark threads are as needful

In the weaver’s skillful hand

As the threads of gold and silver

In the pattern He has planned

He knows, He loves, He cares;

Nothing this truth can dim.

He gives the very best to those

Who leave the choice to Him.

We, while still on this earth see through a glass dimly but will see perfectly when we see Jesus face to face. Our sight is limited by earthly limitations and we cannot fathom the beautiful picture God is creating out of our lives. 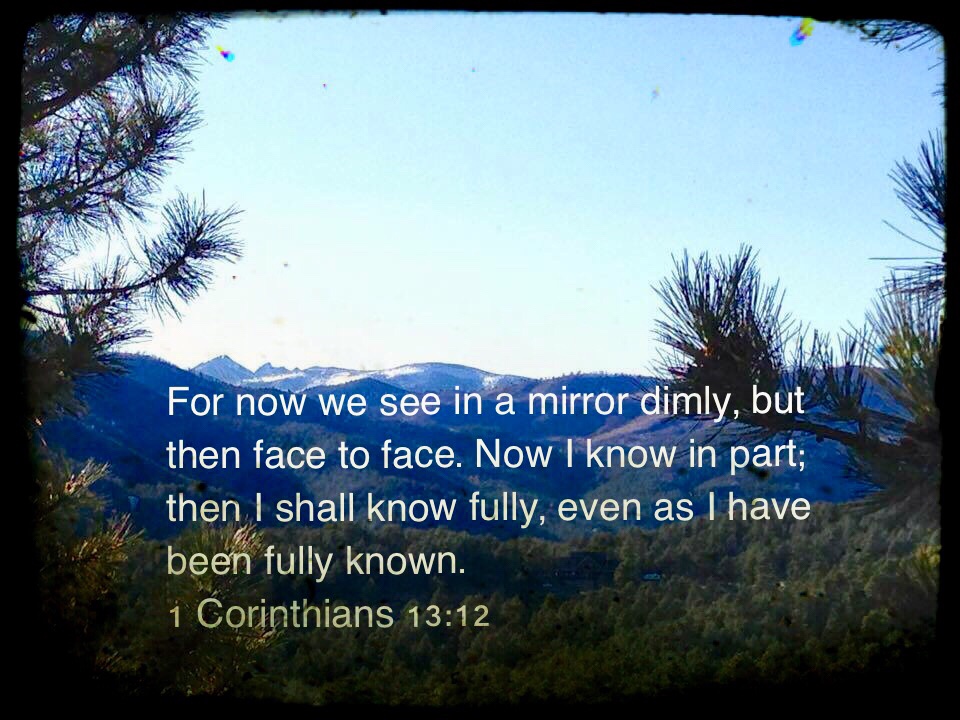 A picture without contrast of colors and dark and lights is boring and doesn’t display as well. My dad was an artist and worked in a printing company that did mainly advertising. Colors, contrast and light scale were all very important to get the message across. Yet we often find ourselves complaining as God weaves in the “needful dark threads” of pain, suffering, grief and hard circumstances. I do not know what dark threads God is including in the tapestry of your life, but I firmly believe even when I don’t see or understand the dark ones He is weaving into mine, that He is still faithful, good, wise and sovereign and knows how best to conform me to the image of His Son.

When you only see a small section of the back is even more confusing than looking at the entire back side. Or if you only see the dark areas you lose sight of the bright cheery ones. 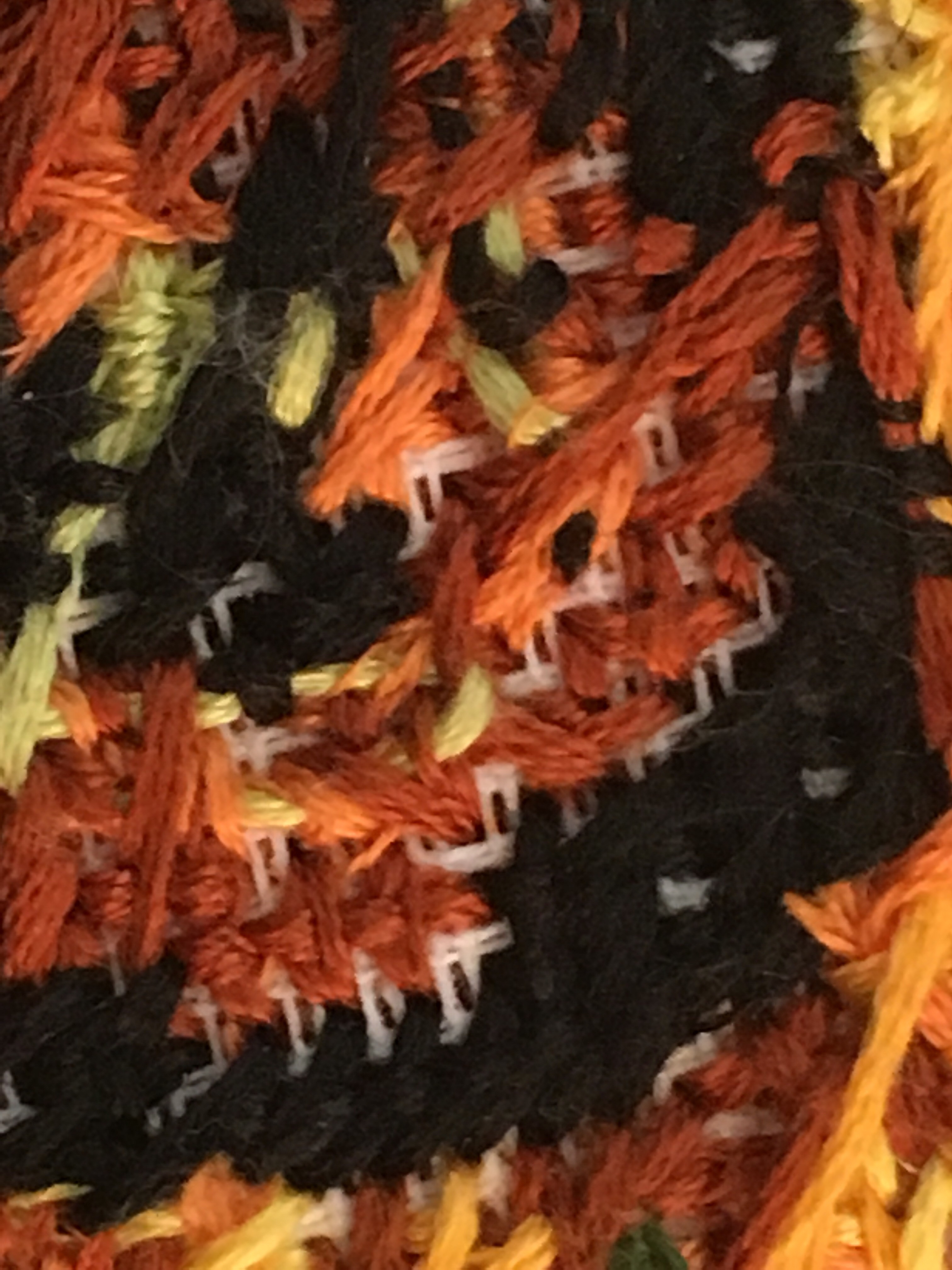 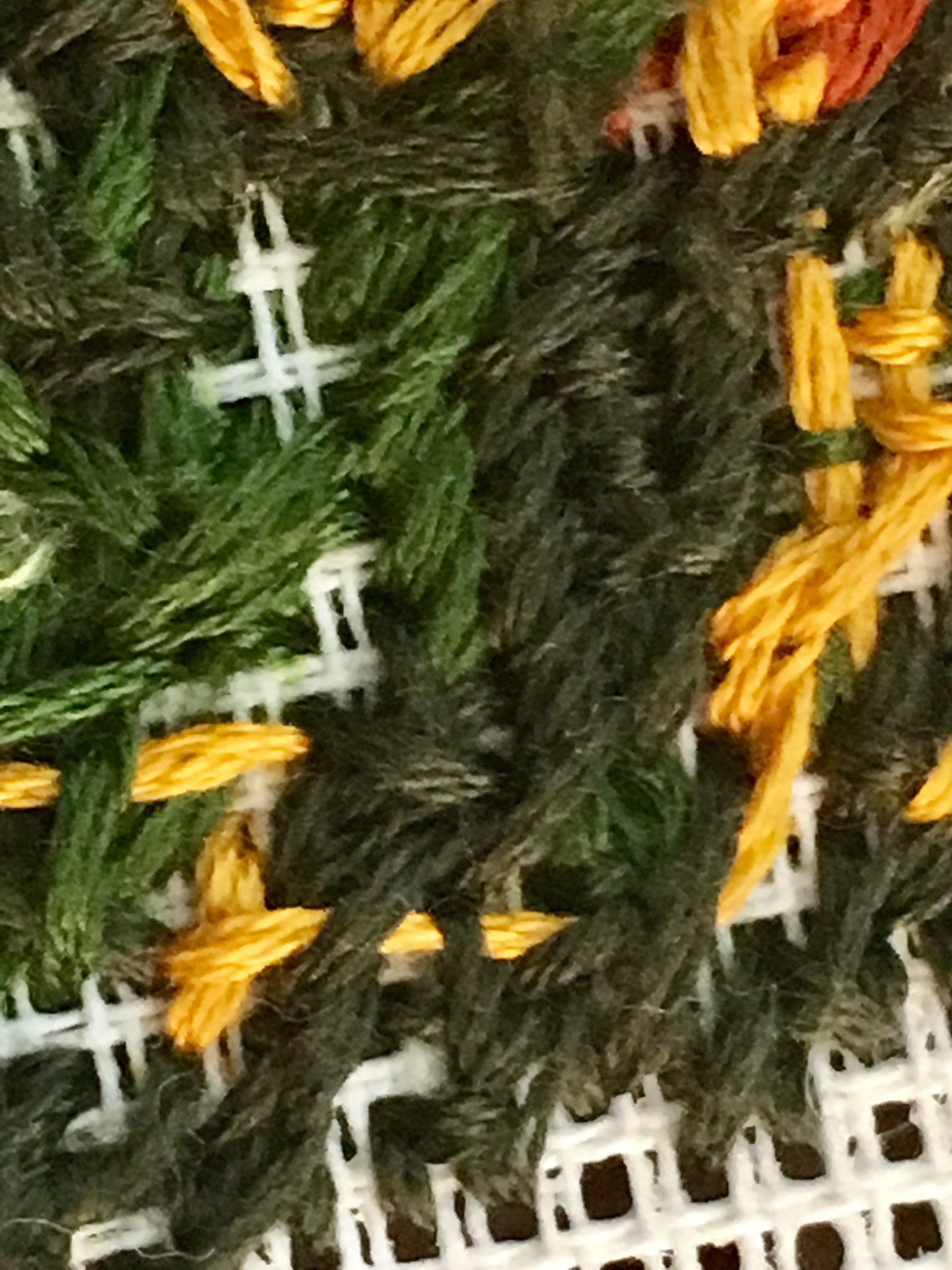 And here is entire backside of the needlepoint. You can get an idea of what it will be but cannot fully capture the details. Much like as later in life when we look back and remember all the things God has done in our lives and brought us through. 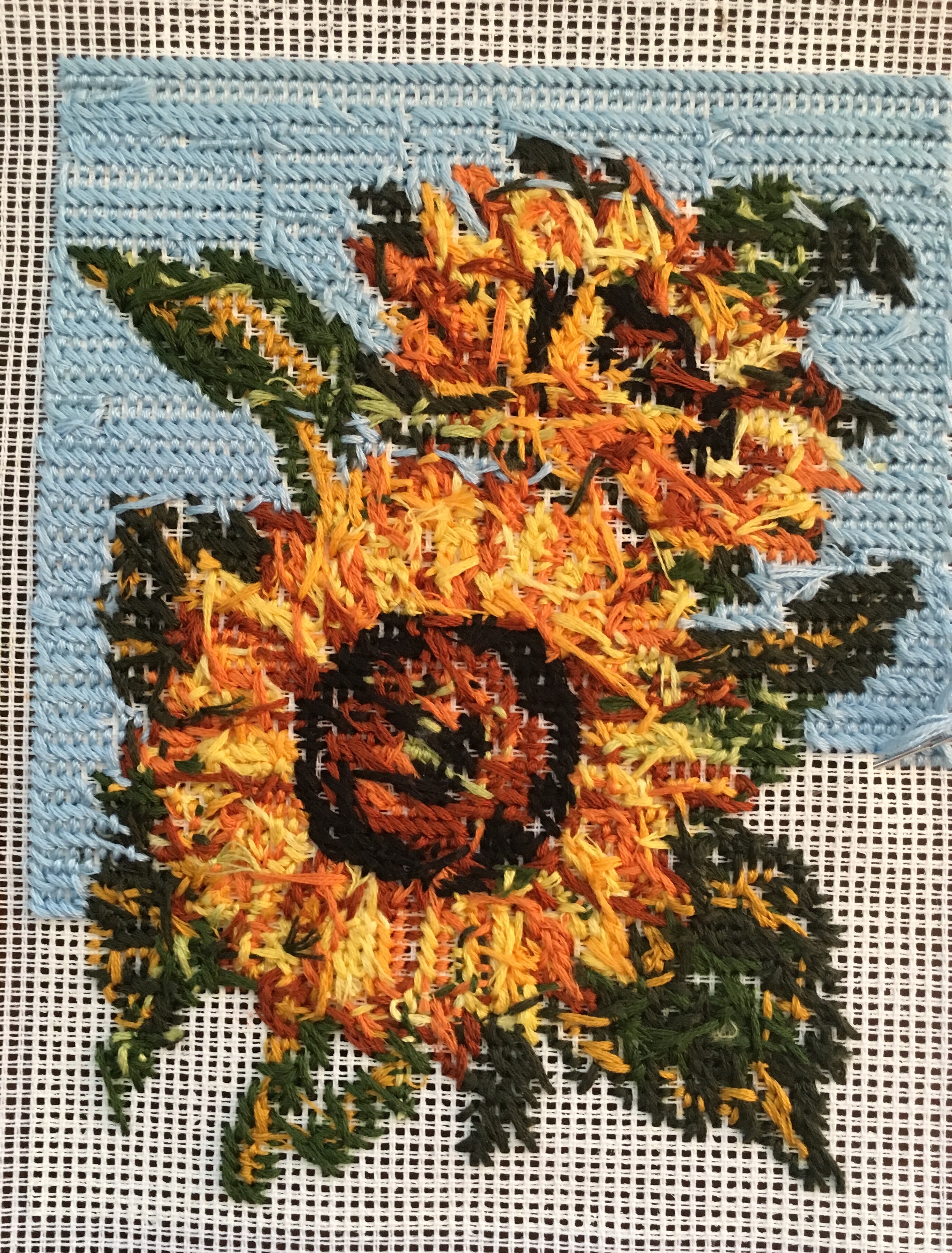 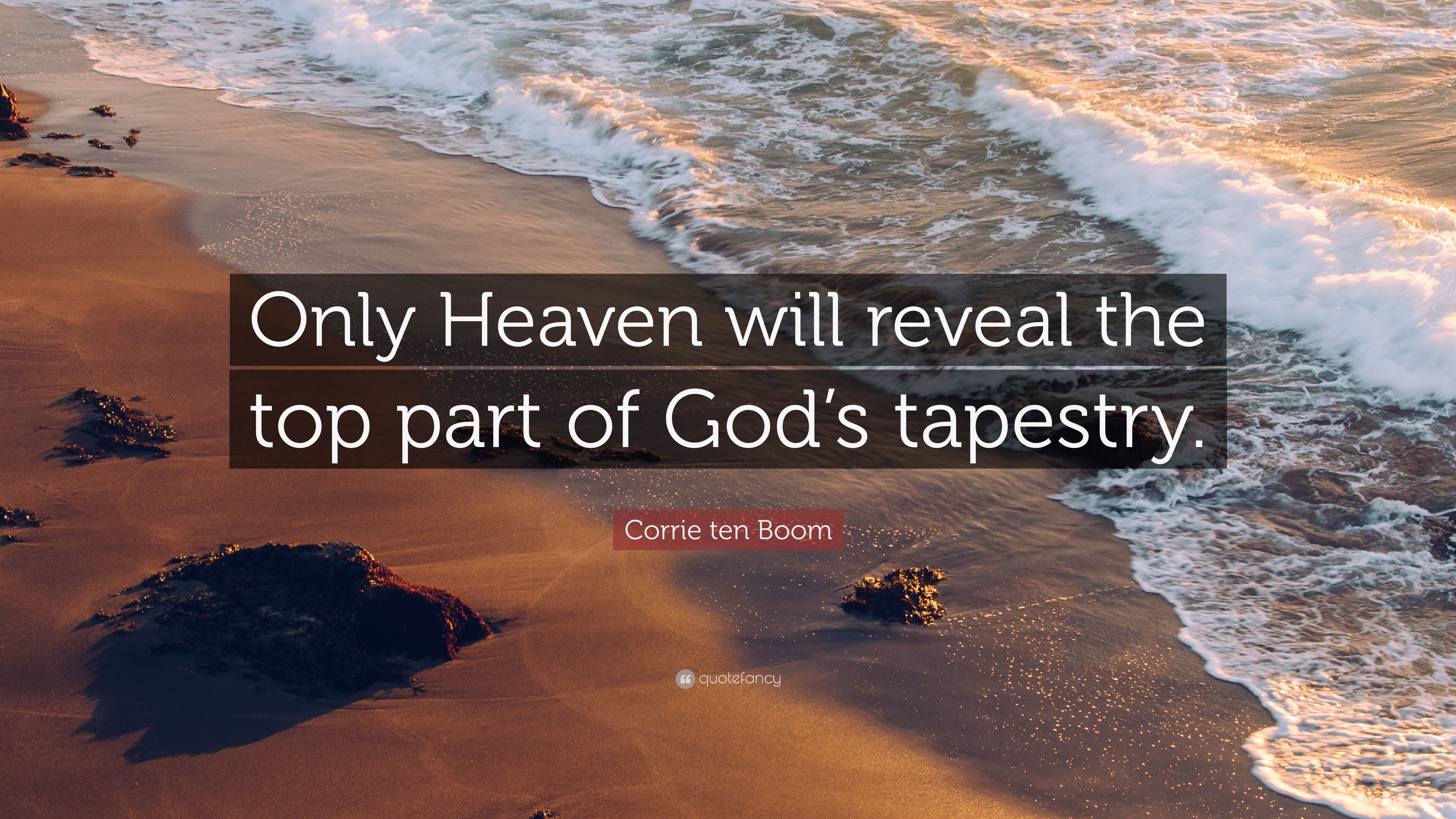 One of my favorite Bible stories is about David at Ziklag in 1 Samuel 30.

David has just returned from battle with his mighty men to discover an enemy had burned their homes then kidnapped all their women and children. His men are distraught, as I am sure David was also since he had two wives taken. His men were threatening mutiny and talking about stoning David. How did David react?

1 Now when David and his men came to Ziklag on the third day, the Amalekites had made a raid against the Negeb and against Ziklag. They had overcome Ziklag and burned it with fire

2 and taken captive the women and all who were in it, both small and great. They killed no one, but carried them off and went their way.

3 And when David and his men came to the city, they found it burned with fire, and their wives and sons and daughters taken captive.

4 Then David and the people who were with him raised their voices and wept until they had no more strength to weep.

5 David’s two wives also had been taken captive, Ahinoam of Jezreel and Abigail the widow of Nabal of Carmel.

6 And David was greatly distressed, for the people spoke of stoning him, because all the people were bitter in soul, each for his sons and daughters. But David strengthened himself in the LORD his God. – 1 Samuel 30:1-6

David strengthened himself in the Lord his God. Another version says “he encouraged himself in the Lord”. I imagine he was looking back over his life how God has helped him as a shepherd boy deal with lions and bears oh my! Recalling when as a young ruddy cheeked boy he killed the giant Goliath with a stone from his sling with God’s help. Also he may have thought of his many skirmishes with the mad King Saul and the Philistines. His faith was strengthened as He remembered God’s care in previous hard times and he was encouraged to have hope in this present very dark situation. In a way, David examined the tapestry he had seen woven so far by God in his life. 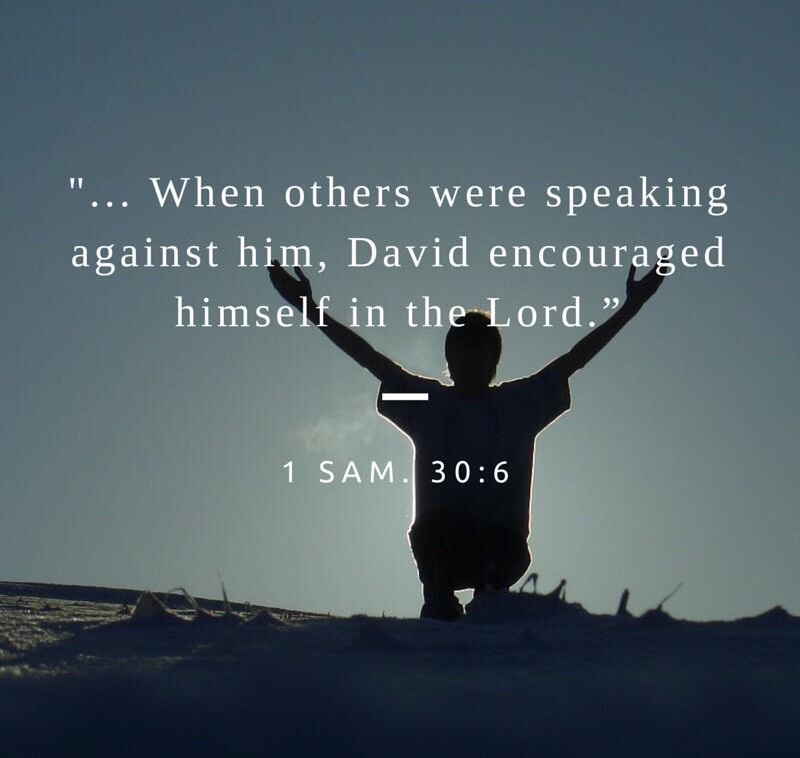 So when hard times come, do we only focus on the current dark thread or do we see the many colored, darks and lights of your life to this point? Do we remember how God has met us in previous dark times?

May you and I, like David, be able to strengthen and encourage ourselves in the LORD. May we remember our Master Weaver is creating a beautiful masterpiece from our lives for His glory. 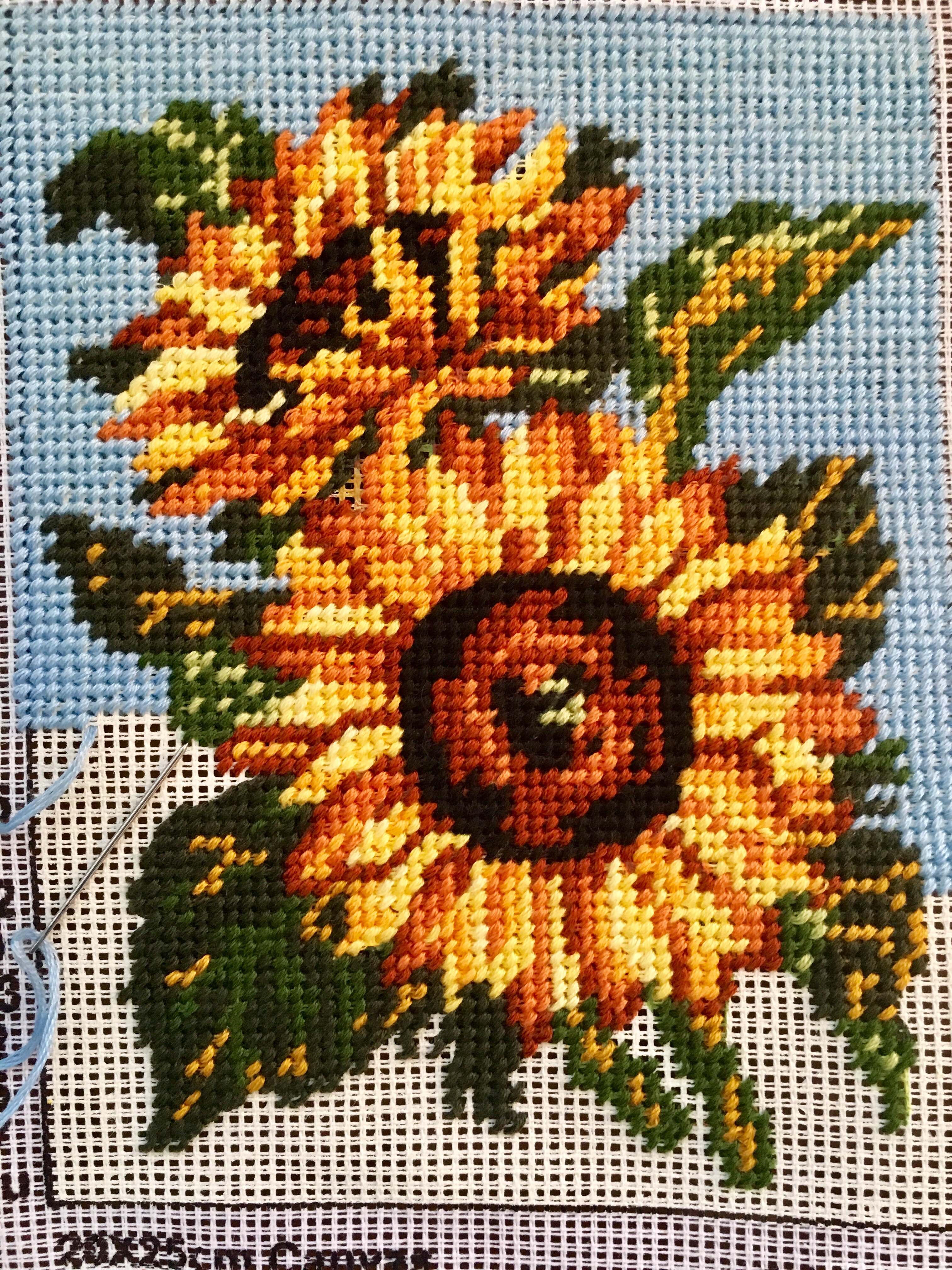 Corrie Ten Boom and The Weaver

4 thoughts on “The Master Weaver”